From Landfill to Athletic Field

In 2012, Loyola University Maryland clinched the NCAA Division I Men’s Lacrosse National Championship. The triumphant team brought the winning medal back to their home field—Ridley Athletic Complex in Baltimore. Less than a decade earlier, however, that athletic field was hosting a different kind of metal—scrap metal, from a landfill.

The athletic complex is partially situated on top of a former municipal solid waste landfill, but the location is perfect. It is conveniently located near Loyola’s campus and I-83, but there have been challenges with the field. 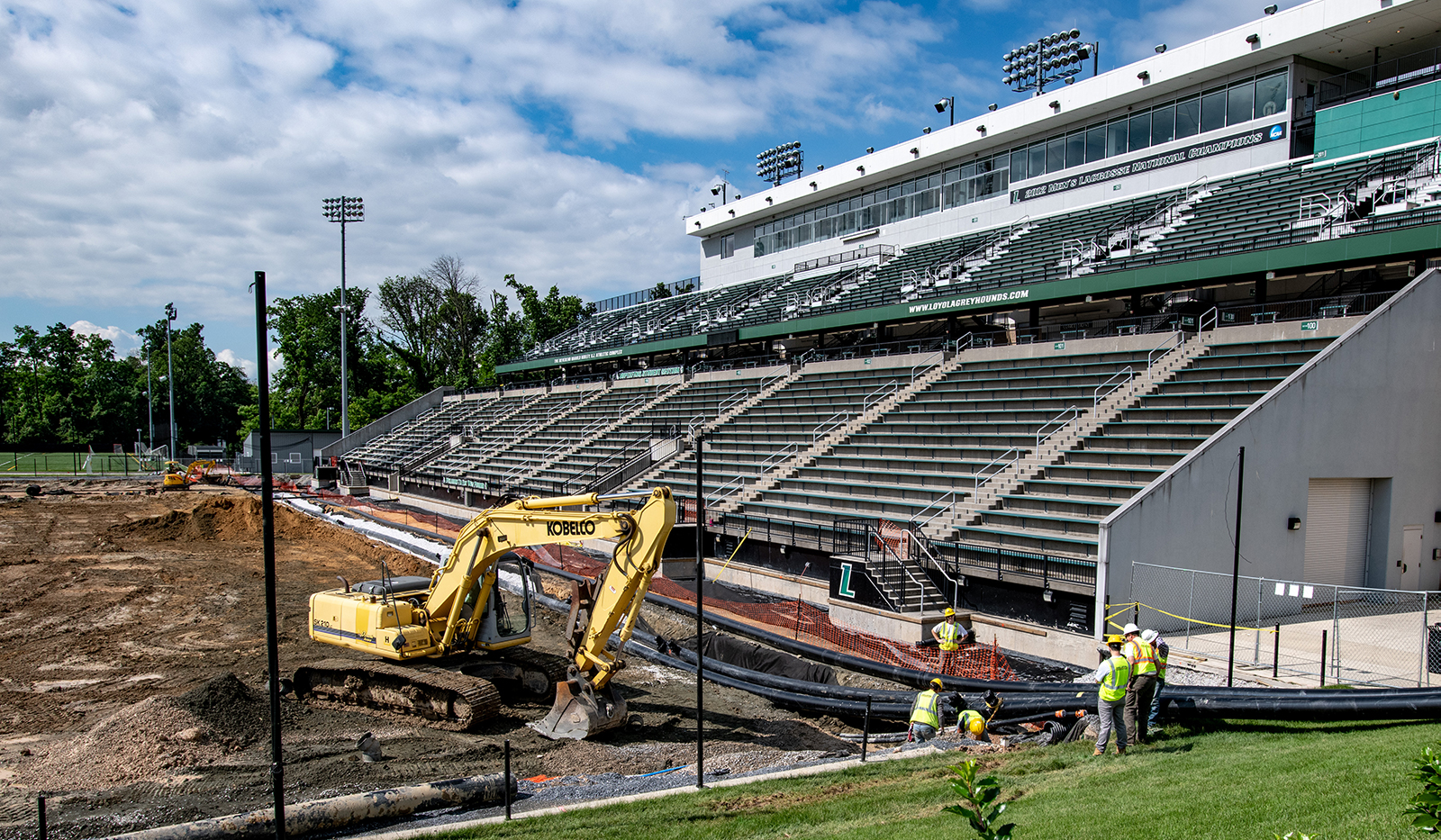 With the decomposition of solid waste over time, differential settlement of the overlying soils can occur. The overlying soils at the Ridley Athletic Complex field began to exhibit the effects of differential settlement, which in turn compromised the playability of the sports turf utilized by the student athletes. As a temporary solution, Loyola removed portions of the sports turf and put in additional stone to level it out. However, the field was sinking faster and faster. Some parts of the field had settled as much as a foot and a half. So, Loyola University decided to pull up the sports turf, the cover soil, and the existing liner system to implement some design changes that would minimize the settlement’s impact.

Hallaton, working in conjunction with the contractor Whiting Turner, played a vital role in renovating the landfill-turned-field in the summer of 2018. We were responsible for installing the new gas collection piping and geosynthetic liner system. 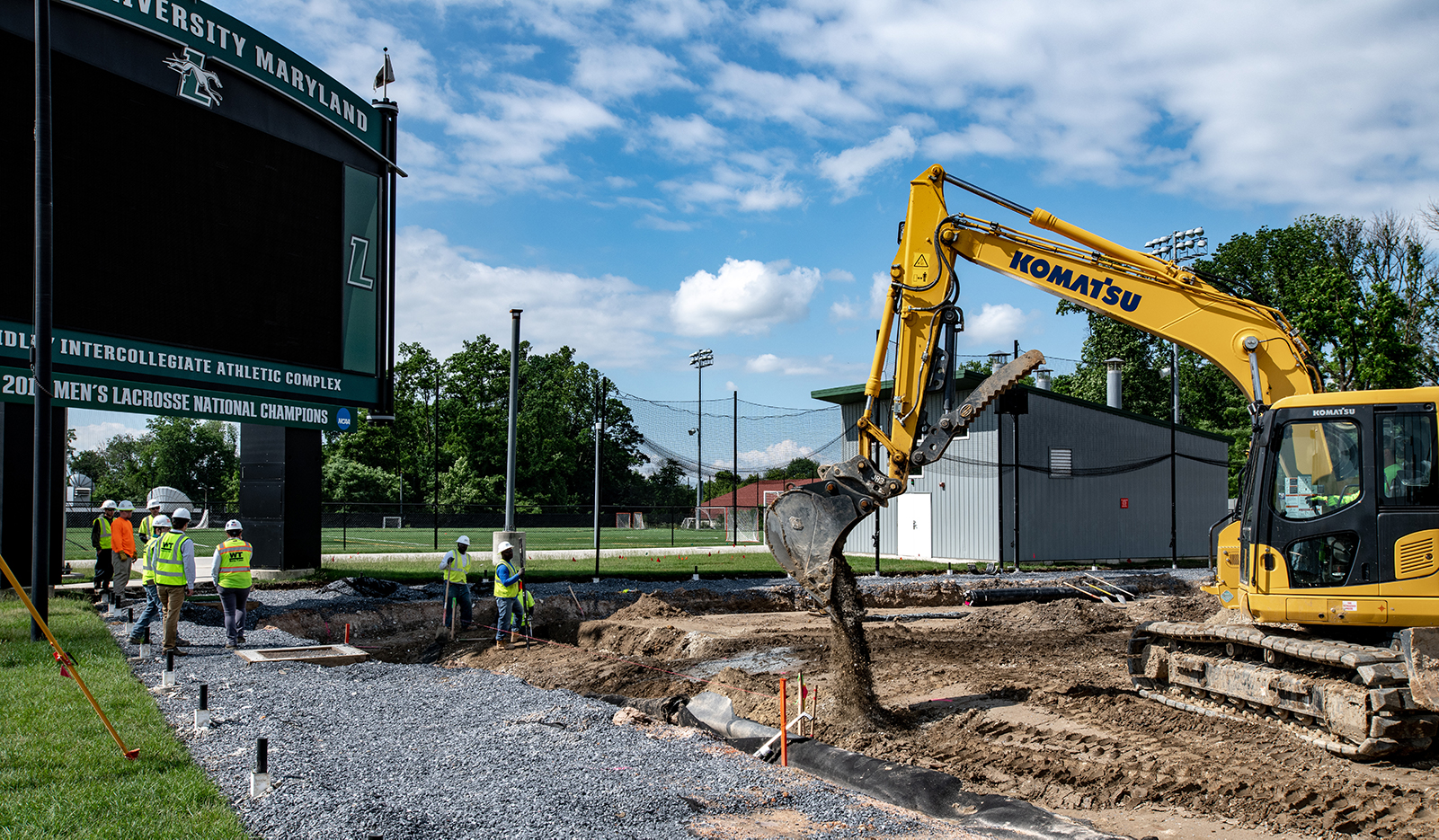 “It’s like capping a typical municipal solid waste landfill, but instead of a big grassy hill, this one’s got an athletic complex on top,” said Kennedy Garber, Vice President of Construction at Hallaton. “In addition to the normal liner work that we’d be doing on a landfill, we also installed the gas collection system, which is unique.”

As is typical with all landfills, decomposing trash releases methane gas, which could be explosive. Since the athletic complex can seat 6,000 people, safety is especially a concern. Gas collection pipes draw out the methane and safely vent the gas so it doesn’t get trapped underneath the liner. As part of the field renovations, Loyola decided to upgrade the piping system utilizing HDPE fusible pipes. These newly installed HDPE pipes are more reliable and effective because the material is thermally welded. 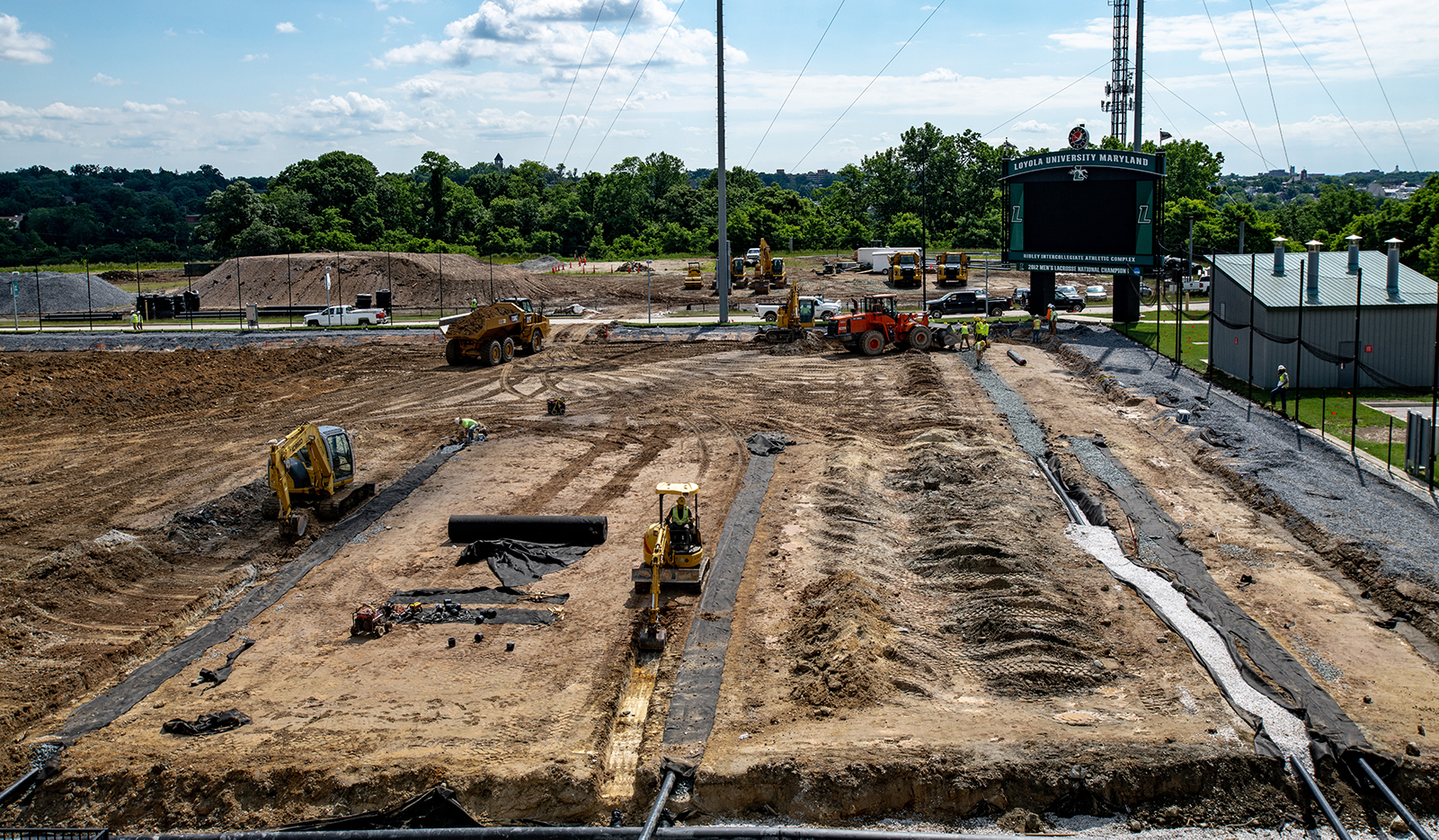 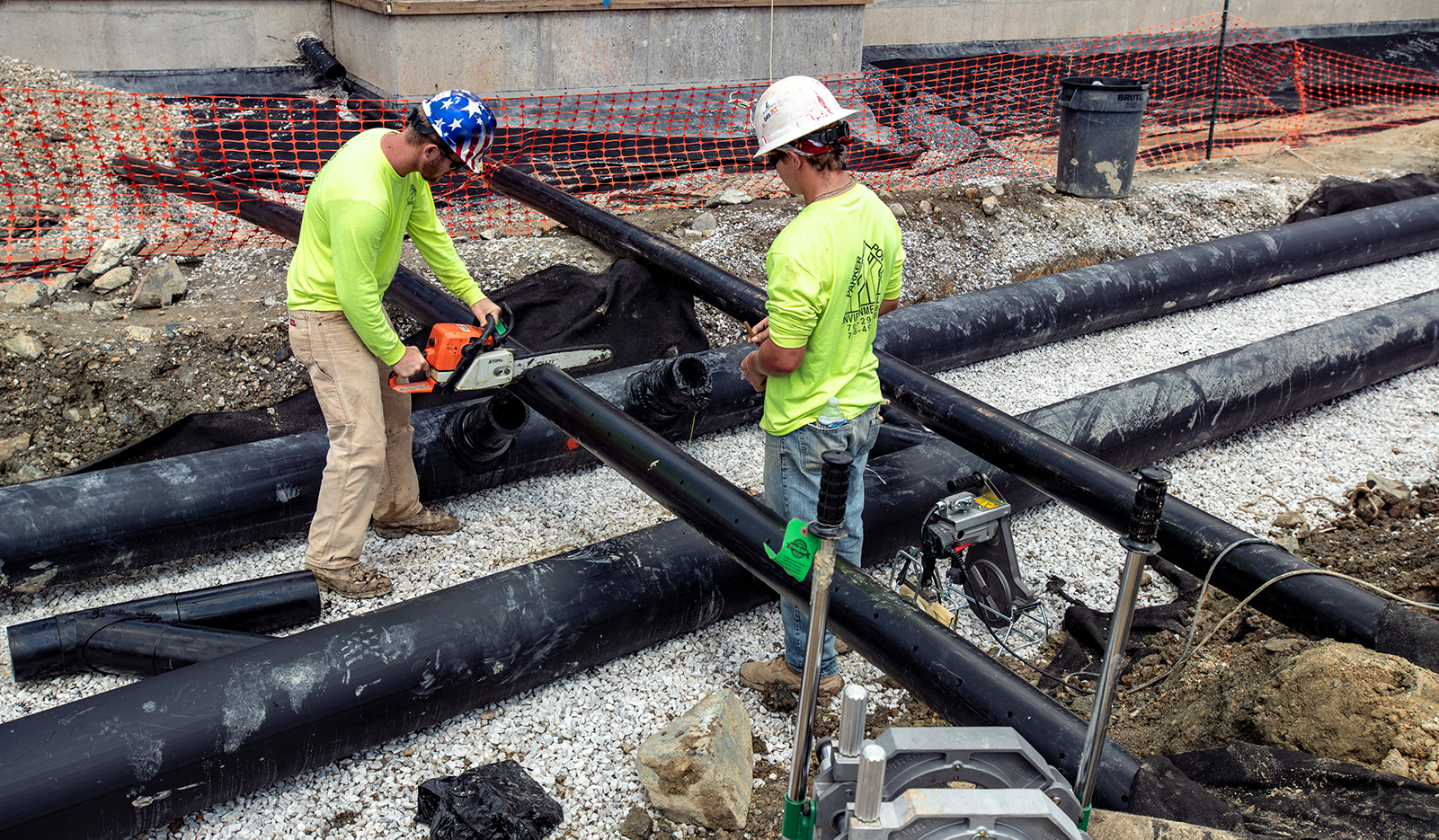 “This is the most complex pipe system we’ve done,” said Justin Harward, Hallaton’s Operations Manager. “It’s been a lot more extensive than a landfill that we normally do. This has to drain water plus draw gas. It’s difficult trying to get them to do both things.”

One of the project challenges was an extremely aggressive construction schedule. The sports turf couldn’t be removed until the last lacrosse game of the season was played in mid-May. The entire project was to be completed within two months, and the field had to be completed and ready for use by mid-August, when the students returned. Hallaton was able to complete our scope of work within the time frame provided.

“Usually it would take us 5 to 6 weeks to install the piping, if we weren’t trying to rush,” said Justin. “But we were only given 3 weeks.” Since the time was cut in half, we brought in extra manpower and extra equipment. 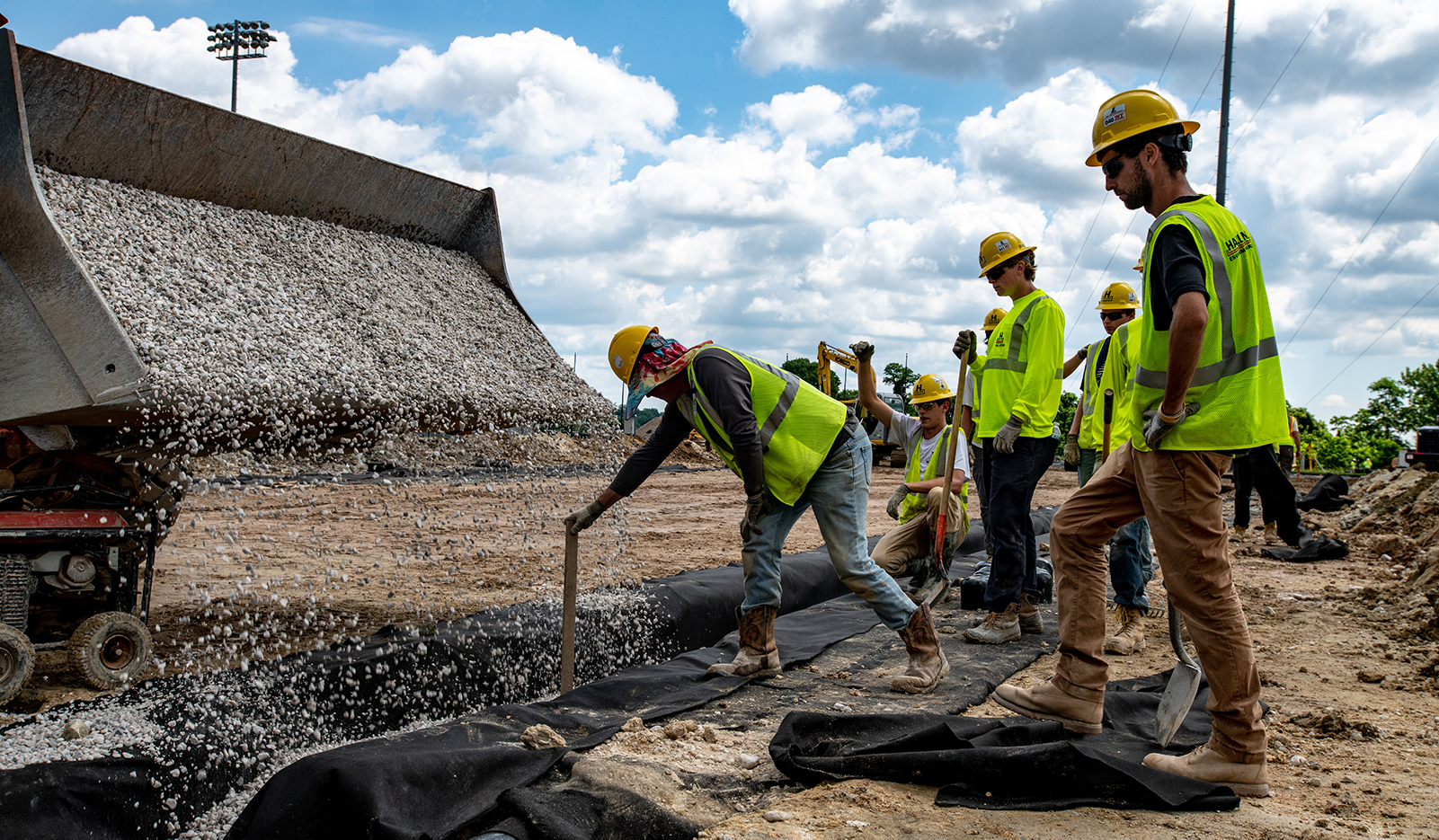 “We had to install the piping quick enough so that our liner crew could come in and put the liner down, test it, and finish it so the next contractor could put the cover stone on top of our liner,” said Kennedy. “So we worked for 7 days a week out here, until 5 or 6 pm. We were ready to turn on the game field lights and work until 11:00 at night, if it came to that.”

The fact that it rained for two weeks didn’t help the tight schedule. “The site was all muddy and torn up, but there’s nothing you can do about the weather,” said Kennedy. “We just had to work around it, because we were committed to getting the field back to Loyola on time, no exceptions.” 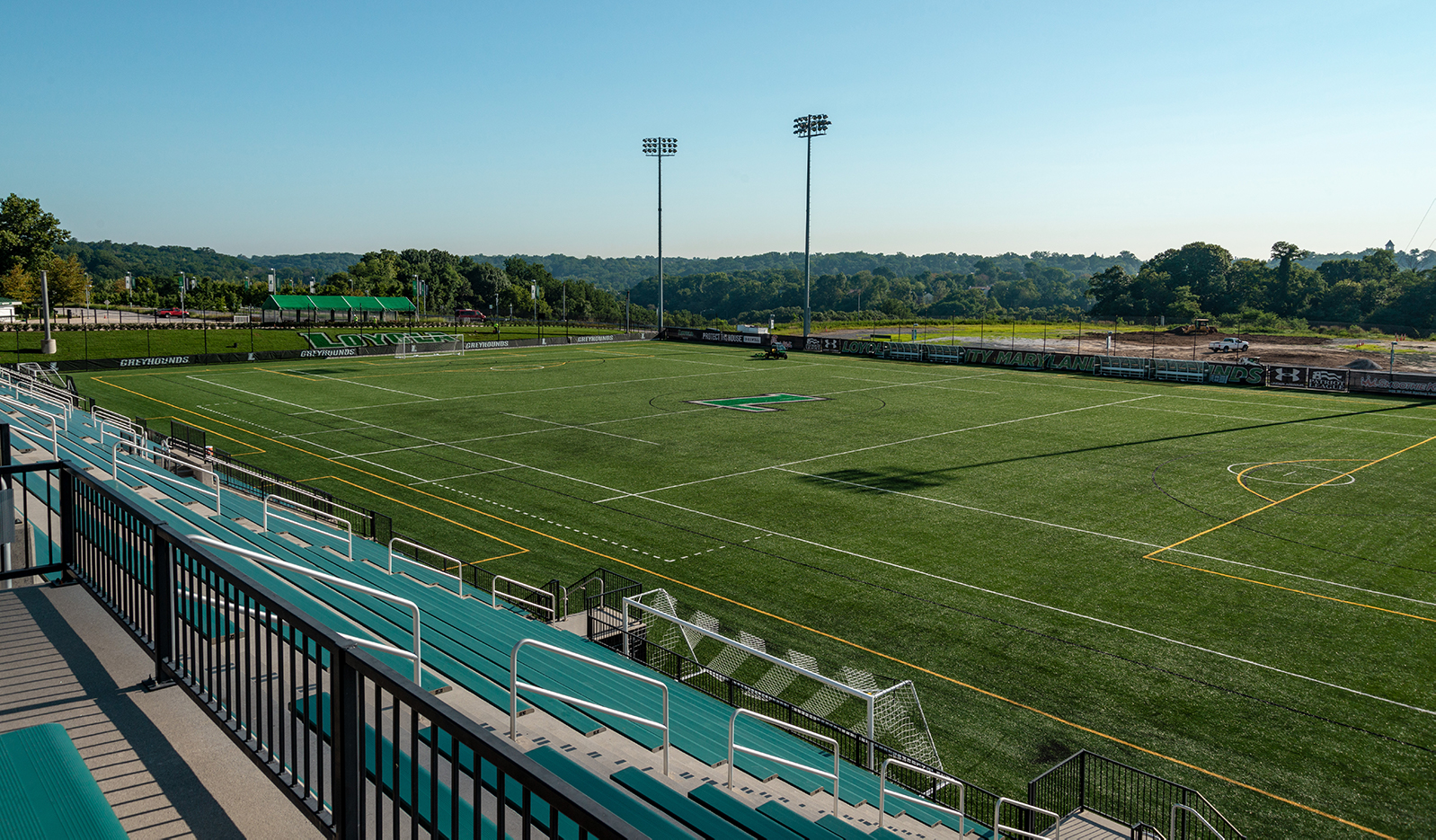 The rain also created water control problems. Since the rain was on top of a landfill, the water wasn’t considered clean enough to leave the site. “So we pumped the water out of the trench, and we had to pump it back on top of the area we were working on,” said Kennedy. “We were just making our whole muddy problem worse every time it rained.”

Despite the challenges, we worked hard and installed the gas piping system and liner system in time. “This was definitely a high profile project for us,” said Kennedy. “It’s close to home, so it’s one we really wanted to do, because it feels good to be working here in Baltimore.” 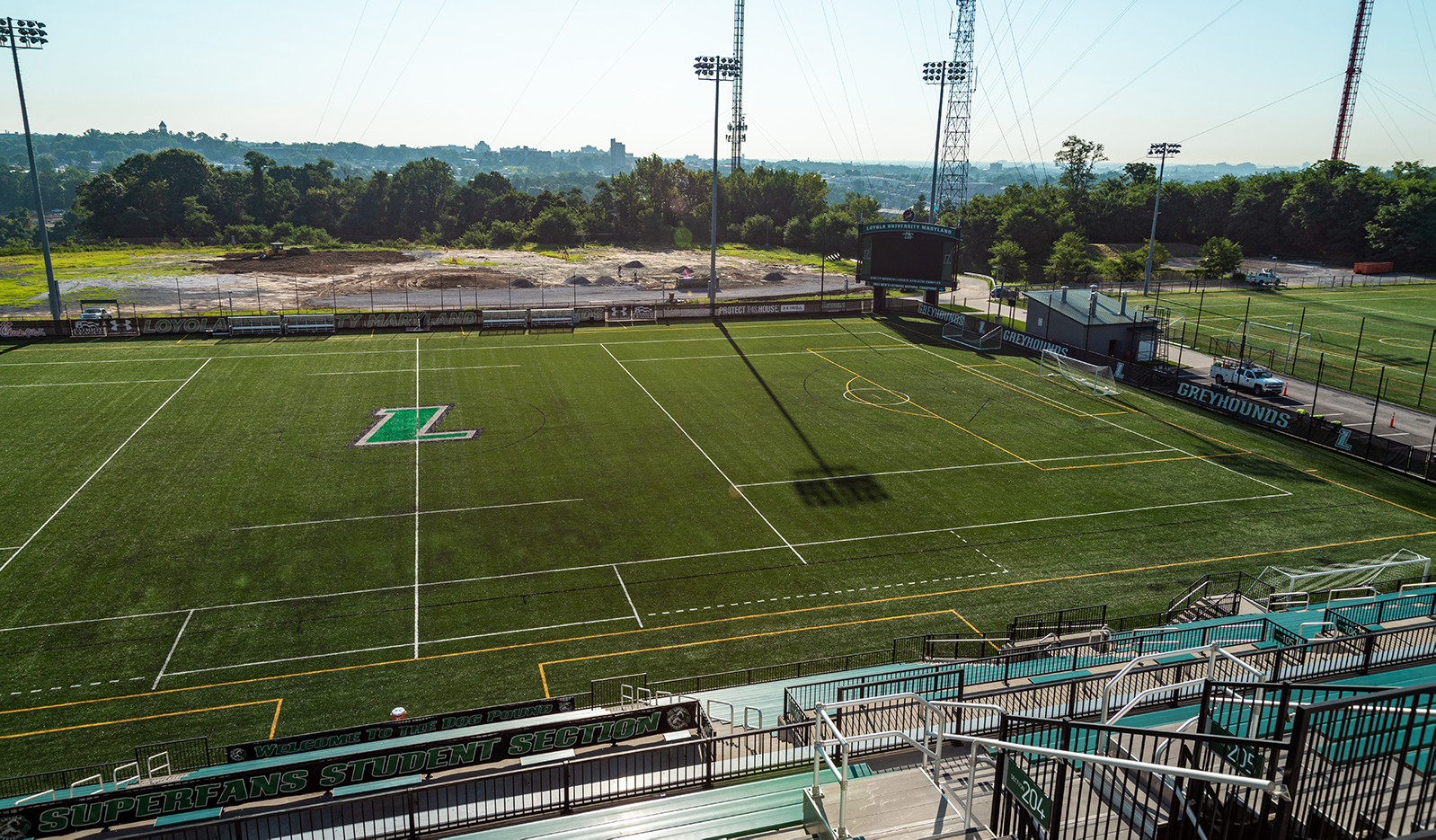